Labour cost refers to the total expenditure of employers when employing staff. It covers wages and non-wage cost. Non-wage cost includes the employers’ social contributions plus employment taxes regarded as labour cost less subsidies intended to refund part or all of employer’s cost of direct remuneration.

The share of non-wage cost has increased since 2008 when it was 17.6%. The main explanations are increases of employers' contribution to pension funds in the private sector and changes to the payroll tax, which increased significantly following the economic collapse in 2008. From 2011 the payroll tax has decreased or remained unchanged.

The share of non-wage cost varies between economic activities. This is, amongst other things, on account of differences in various cost levels due to sick leave and pension fund contributions. The highest share of non-wage labour cost was in the economic activity of Human health and social work (Q), 22.3% in 2020, and in Transportation and storage (H), 21.7%. The lowest share was in Real estate activities (L) 18.9% and in Construction (F) 19.2%.

The figure shows a comparison of the share of non-wage cost for various economic activities at given years. The high share of non-wage cost in the economic activity of Human health and social work (Q) is due to a high rate of sick leave. When comparing years, it should be noted that the private sector contributions to pension funds is higher from 2020 and onwards, than in previous years, becoming on par with the public sector. 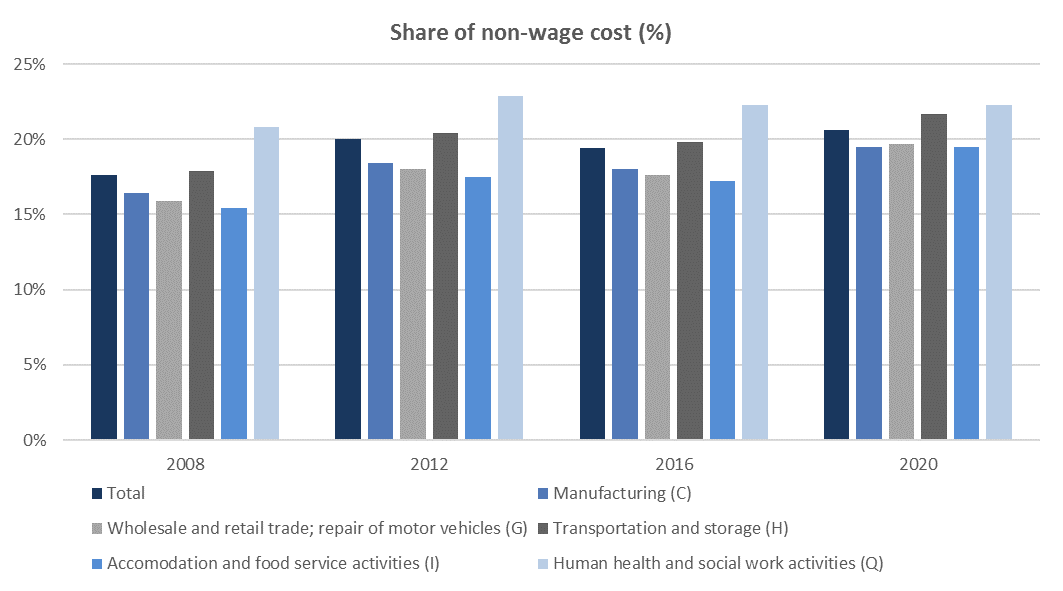 Data series for hourly labour cost by economic activity are published for the first time at the Statistics Iceland website with annual data from 2008. Comparable data can be found on the website of Eurostat, see publication issued on the 31th of March 2021.

About hourly labour cost
Hourly labour cost is based on the Labour Cost Survey (LCS). The intention is to give a comparable and timely indication on labour cost status in all economic activities in Europe as the survey is only conducted every four years. The LCS provides details on the level and structure of labour cost data, hours worked and hours paid for employees, both full-time and part-time. Above-mentioned figures exclude apprentice and the economic activities of agriculture, forestry and fishing and public administration.

Labour cost refers to the total expenditure of employers in order to employ staff and covers wage and non-wage costs. Data presented in this news item covers enterprises with 10 or more employees. Statistics explained articles with more detail are available on the Eurostat website: "Labour cost structural statistics - levels.

The results are preliminary and are part of a development project at Statistics Iceland which is ongoing and is based on utilising various data sources, such as wages subject to pay-as-you-go tax collection according to register data. Hours of work are produced with an ensemble of statistical estimation methods based among other things on surveys performed by Statistics Iceland, mainly the Icelandic Survey on Wages, Earnings and Labour Cost, and register data.