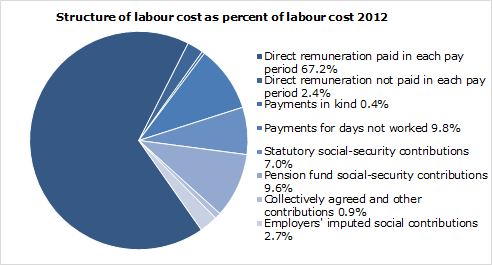 The composition of labour costs in Iceland changed between the years 2012 and 2008 as the proportion of non-wage costs of labour costs has grown more than the proportion of wages and salaries. Most of the change is explained by an increase of the payroll tax and a decrease in direct remuneration not paid in each pay period. In 2008 the proportion of direct remuneration not paid in each pay period was 4.8% but in 2012 it was 2.4%. The reason is a significant change in the economic activity of Financial and insurance activities.

Employers' social contributions highest in Human health and social work
In 2012, the proportion of non-wage labour costs was highest in the economic activity of Human health and social work, 22.3% and lowest in Construction, 17.5%. The difference is explained by different cost levels due to sick leave and pension fund social- security contributions.

These results and more are published in a new issue of the Statistical Series, Labour Costs 2012. The issue presents the proportional compositions of labour costs in Iceland in the year 2012.