Alexander and Emilía the most popular names for newborns

Fewer persons are born during winter, from October to March, than in other months. At the beginning of the year, most people were expected to celebrate their birthday on the 27 of August (1,054) while, apart from 29 of February with 216 persons born, Christmas Day had the fewest birthday celebrators (689).

Popularity of first names by age
The most popular 200 names in Iceland are given names of around 80% of the population. Classical names which are most common in the population as a whole have been constantly in the top 20 for the last 100 years, as shown in the left panel of Figure 1 for female names, and Figure 2 for male names. However, fewer children born in the last 10 years are named Guðrún, Kristín, Sigurður, Gunnar and Ólafur. Some names have kept a constant, rather high ranking through time, like Kristján, Anna, Katrín and Elísabet (see the right panels of Figure 1 and 2). However, the pattern is very different for young children where names such as Emma, Sara, Emilía, Alexander, Aron, Viktor and Mikael have been popular. These names only ranked 500th to 700th for people in older age-groups (right panels of Figure 1 and 2). 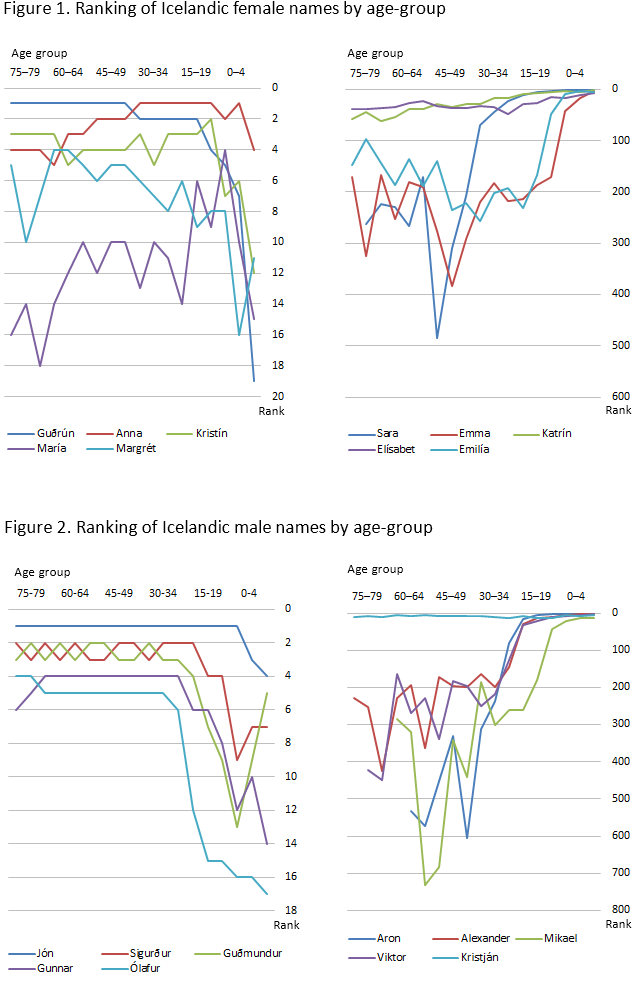 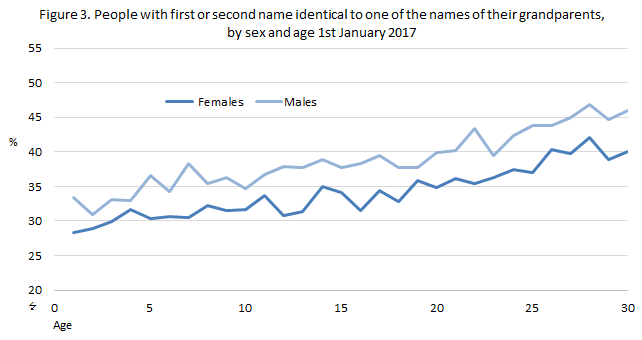 Last names mostly patronymics (föðurnöfn)
Around 82% of people in Iceland have patronymics and/or matronymics (móðurnöfn, föðurnöfn) as their last name, about 4% have Icelandic family names (ættarnöfn) and about 14% have different types of last names, mostly non-Icelandic. The most numerous group carrying matronymics are 18-35 years old women.

If only the father has a family name, most children inherit it (about 70%), but a significant percentage receive a traditionally formed name (about 30%), mostly patronymics. When only the mother has a family name, most offsprings receive a traditionally formed last name (about 85%), mostly patronymic, slightly higher for men than women, and only a small proportion (about 15%), slightly higher for women than men, the mother‘s family name.