Electricity Prices to Households and Industry Lowest in the Nordic Countries

The average price of electricity in Euros/kWh to households and industry was, in general, lower in Iceland than in the other Nordic countries in the first half of 2018 (2018-H1). The price is significantly lower for usage between 1,000 and 2,500 kilowatt-hours (kWh) per year, the most common level among households. The electricity price for usage above 15,000 kWh was also significantly lower than in neighbouring countries. The energy bands summarised here do not correspond to price classes from electricity sellers but are summarised based on actual usage and price paid, including all taxes. The data includes only electricity sold from the distribution network. Direct sales from the production network to heavy industry are not included. 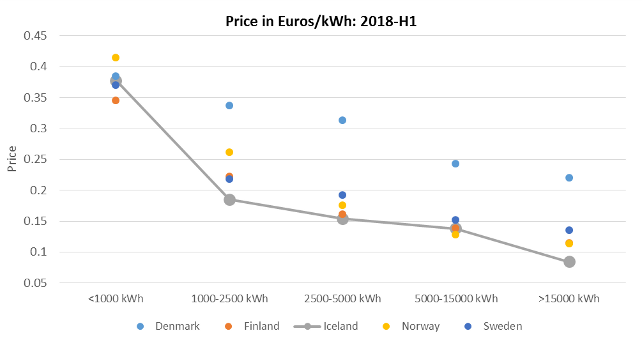 The price of electricity in Iceland is lower than in all the other Nordic countries when prices are converted to price power parity (PPP). PPP allows for a comparison of how much of each currency is required to purchase the same quantity of goods in different economies, thereby minimizing the effects of exchange rates. 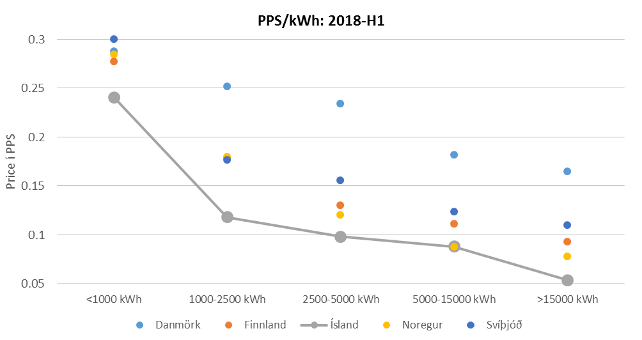 The electricity price for usage between 1,000 and 2,500 kWh has been lower in Iceland than in the other Nordic countries since 2013. Danes have paid most for their electricity, and Swedes, Norwegians and Finns pay 30-40% more than Icelanders. 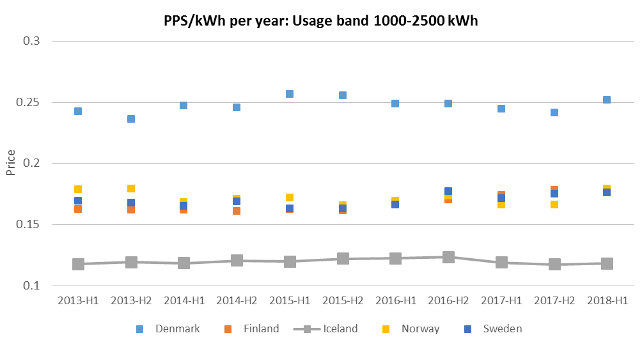 The price of electricity in ISK/kWh has been quite stable in the usage ranges common among households. The price for usage below 1,000 kWh is somewhat high and has fluctuated. In this range, the line fee for the services is a substantial portion of the price. For buyers in the 1,000-2,500 kWh band, the year-to-year change was 1-2.5% until 2016. After that, the price decreased slightly. The price for usage ranges between 2,500-5,000 kWh and 5,000-15,000 kWh has increased between 1-4% from year to year. The price in the top band has fluctuated somewhat between years. This fluctuation is due to price assistance to households that use electricity for heating. 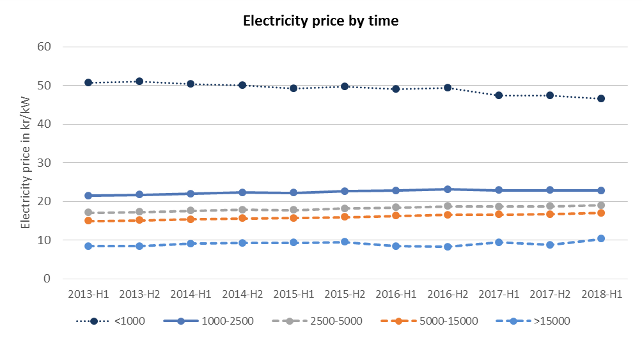 Number of users in each energy band
Approximately one-third of the total sales from the distribution network are in the 1,000-2,500 kWh band. Under 40% of the sales are in the >15,000 kWh band, and less than 1% are in the lowest energy band. An estimate of the minimum number of energy sales in each band can be calculated by dividing the total sales by the upper limit of each band (for the 15,000 kWh band, 25,000 kWh was used as an upper limit). Doing so shows that the majority of users are in the 1,000-2,500 kWh energy band, and the remaining bands contain less than 1,000 users each. In the figure below, only half of the years 2015 and 2018 were available for analysis.