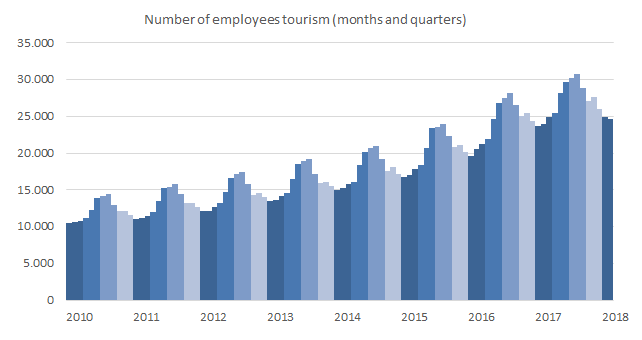 Causes of error and revision of statistics
The aforementioned figures are preliminary. Having income data as the source, there is a risk of underestimating the latest figures when employers do not submit information in a timely manner. Other causes of error include reimbursement to former employees. When new data are published, previous figures are revised. For more information on how figures are revised and the magnitude of recent revisions, please refer to the metadata and the summary of revisions.

Previously published statistics on employers and employees have been revised, taking into account the latest available information on salaries and classification of employers based on their main economic activities.

Other statistics on business economy
Statistics Iceland publishes annual income and balance statements of enterprises by activity, based on tax returns, providing a detailed picture of the individual sectors for the period 2002-2016.

Statistics Iceland conducts a continuous labour force survey (LFS). The main results (e.g. unemployment) are published monthly and more detailed results (number of full time employees, working hours by industry etc.) are published annually. The labour force survey provides information on both employees and self-employed, and only people who are permanently living in Iceland are included in the sample. Hence, the LFS-figures are not the same as published in this press release. Data on the number of employers and employees should be used mainly as short-time indicators and to provide information on within-year variations.

It should be noted that these figures do not include information on the self-employed with calculated remuneration, a setup common in construction, agriculture and creative industries. Statistics Iceland has started publishing register-based data on people in employment, including those who are on maternity leave or self-employed. That publication encompasses the number of employees by gender, age, background and legal residence. Those figures will be updated monthly on Statistics Iceland’s website.