Iceland has the highest per capita CO2 emissions from the economy

Iceland had the highest per capita emissions of carbon dioxide from the economy compared with EU and EFTA economies in 2016. Iceland was ranked third or fourth from 2008 to 2014, but emissions have increased since 2012 due to increased activity in air and marine transport. 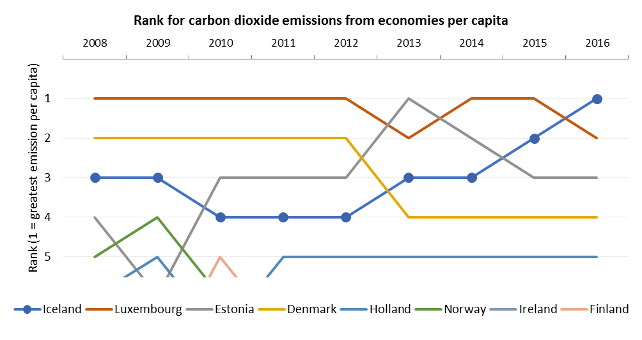 The economy ranked first has the greatest per capita emissions. The comparison is only done between economies in the EU+EFTA area.

The economies at the top of the list have economic segments which dominate their emissions. The majority of emissions from the economy of Luxembourg come from the air transport section, both air cargo and passenger transportation. Marine transport is the dominating sector for the Danish economy, which is home to the world’s largest shipping company. In 2016, only 15% of Estonian power generation came from a renewable source, which makes this sector the dominant emitter with the economy. Estonia produces 93% of their energy needs, which is the highest portion within the EU. Emissions from the Icelandic economy originate mainly from two sectors: air transportation and production of basic metals. Emissions from metal production in Iceland are due to consumption of graphite in electrodes rather than from fuel combustion. 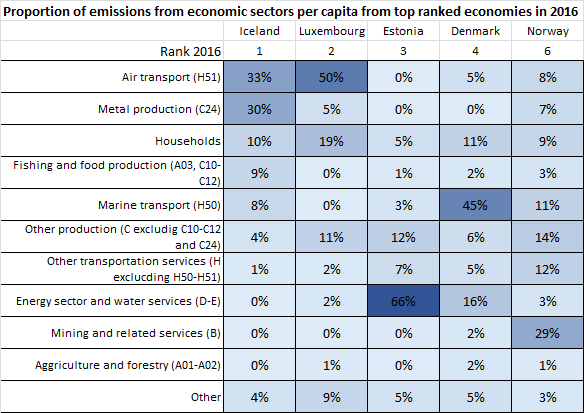 Texts in brackets indicate the economic segments according to the NACE rev.2 (ISAT2008) classification for economic activity.

It is reasonable to assume that the air transportation sector and manufacture of basic metals continue to dominate emissions from the Icelandic economy in 2017 and 2018. The growth in the airline industry continued until 2018 and manufacturing of silicon metal started. The CO2 emission from the economy per capita has therefore increased further since 2016.

Further per capita comparison between emissions from economies within the Nordic countries
The change in per capita carbon dioxide emissions from the economy for Iceland has been the opposite of the changes in the other Nordic countries. The Danish economy has managed to reduce its per capita emissions by the most after the value reached a maximum in 2006. Sweden has the lowest per capita emissions, ranking number 25 within the EU+EFTA, which encompasses 32 countries that turn in emissions accounting. However, very few countries within the EU did not turn in an Air Emission Account (AEA) for the years prior to 2008. In 2008, new economic sector definitions, which are used in the AEA, were introduced. Additionally, it becomes more difficult to ensure data quality for years closer to 1995. 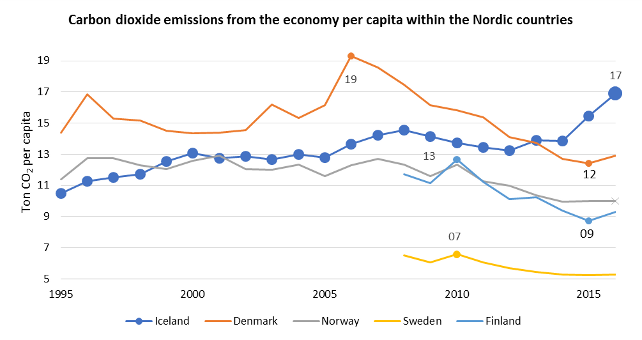 Sweden and Finland have not reported for years prior to 2008. Figures from Norway for 2016 are also missing. Estimated values are indicated with an x. 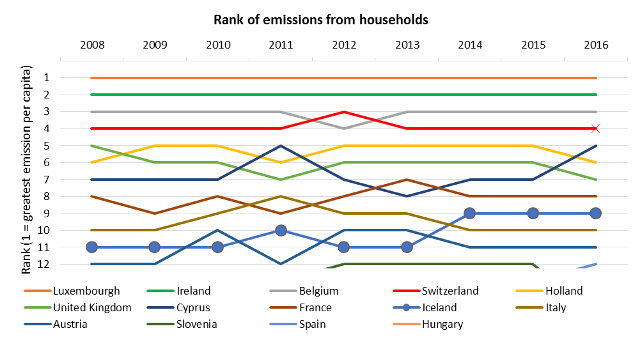 The economy ranked first has the greatest per capita emissions. Missing values in the series are estimated and labeled by an x. The comparison is only done between economies in the EU+EFTA area.

This move from household heating units to central operation explains much of the reduction seen in household emissions in Luxembourg (by 21% from 2008). In general, the development within the EU is towards lower per capita emissions. This development could be explained in part by changes in vehicle technology within the area. Automobiles have improved their fuel efficiency since 2005, after getting worse from 1985 until that year. Curiously, emissions per household were often significantly lower in 2014 than in 2016, as is seen in the values for Iceland. 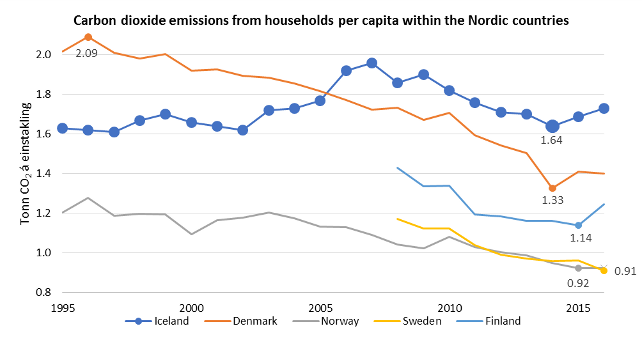 Sweden and Finland have not published data prior to 2008. Values for 2016 are also missing from Norway, but an estimated value is shown with an x

Icelandic households have managed to reduce their emissions from 2008, but the value for 2016 is still higher than what was calculated for 1995. The increase in emissions from 1995 to 2007 resembles the general trend for household spending in the years prior to the economic collapse of 2008. The reduction post collapse is also somewhat reflected in the emission trends, but renewal of the household car fleet didn’t start until a few years after the crash. It can be estimated that electrification of the car fleet will further reduce the household emissions after 2016

About the emission account for the economy
Values for greenhouse gas emissions from the economy of Iceland give an alternative viewpoint from the National Inventory Report (NIR), which is published by the Environmental Agency of Iceland. The NIR is the official report that Iceland submits to evaluate compliance with its international commitments from the Kyoto protocol and the Paris agreement. The NIR counts emissions that occur within the land-space of Iceland, regardless of the nationality of the emitter. Statistics Iceland submits the Air Emission Account for the Icelandic economy to Eurostat. The AEA counts all emissions resulting from activities by Icelandic companies and households, regardless of the location of the emissions. Both viewpoints use the method specified in the International Protocol for Climate Change (IPCC). The difference in the accounting was discussed in a news release from October 26th.

Go back
Use of this press release is free. Please quote the source.
For further information please contact umhverfi@statice.is, tel. +354 528 1278