Fruit and vegetable consumption similar in Iceland as in Europe

One out of every ten residents in Iceland eats five or more portions of fruits and vegetables per day, or 10%, according to the Icelandic Health Interview Survey from 2015. These results yield Iceland in the 12th lowest seat in European comparison. Women are more numerous in this group but consumption of fruits and vegetables is also related to levels of education, age and residence.

Similar consumption as in Europe
Just over third (35%) of respondents in Iceland reported eating less than one portion of fruits and vegetables per day which is similar to the average within the European Union (34%). This proportion is highest in Romania (65%) and lowest in Belgium (16%).

The proportion that reported eating between 1 and 4 portions per day was 55% which is slightly above the EU average (51%). This proportion is highest in Belgium (71%) but lowest in the Netherlands (29%).

The group that reported eating five portions or more a day was 10% in Iceland, a little below the average within the European Union (14%). This group is largest in the United Kingdom (33%) and Ireland (29%) but smallest in Turkey (3%). 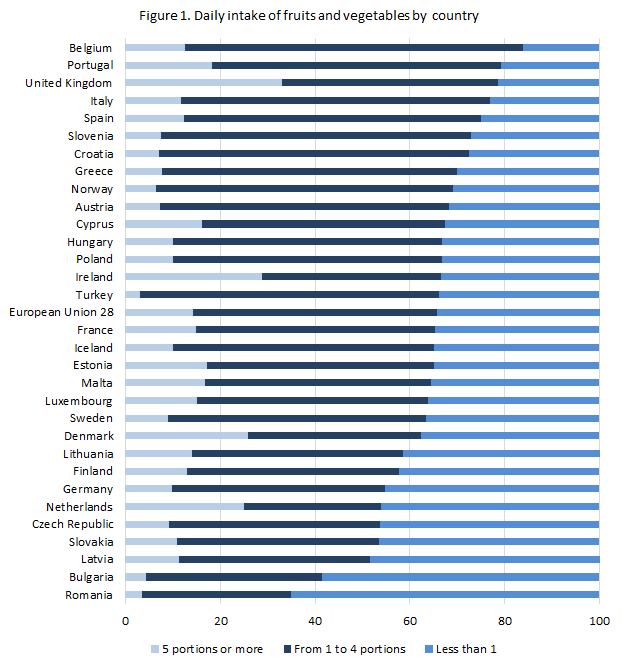 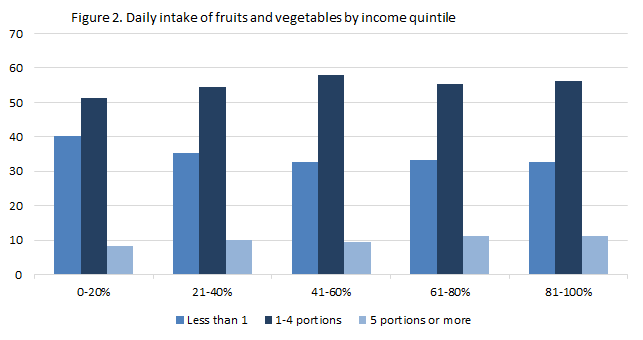 Further analyses on consumption of fruits and vegetables by education, age, income and residence are to be found in tables on the Statistics Iceland website.

About the European Health Interview Survey
Health interview surveys offer comprehensive data on the health status of a population and health-related topics based on answers by respondents of a representative sample of the population. The Icelandic survey was conducted in autumn 2015. The sample consisted of 5,700 individuals drawn randomly from the population registry. This yielded responses from 4,001 persons, a response rate of 70.2%.

Go back
Use of this press release is free. Please quote the source.
For further information please contact Thora.Thorsdottir@statice.is, tel. +354 528 1285