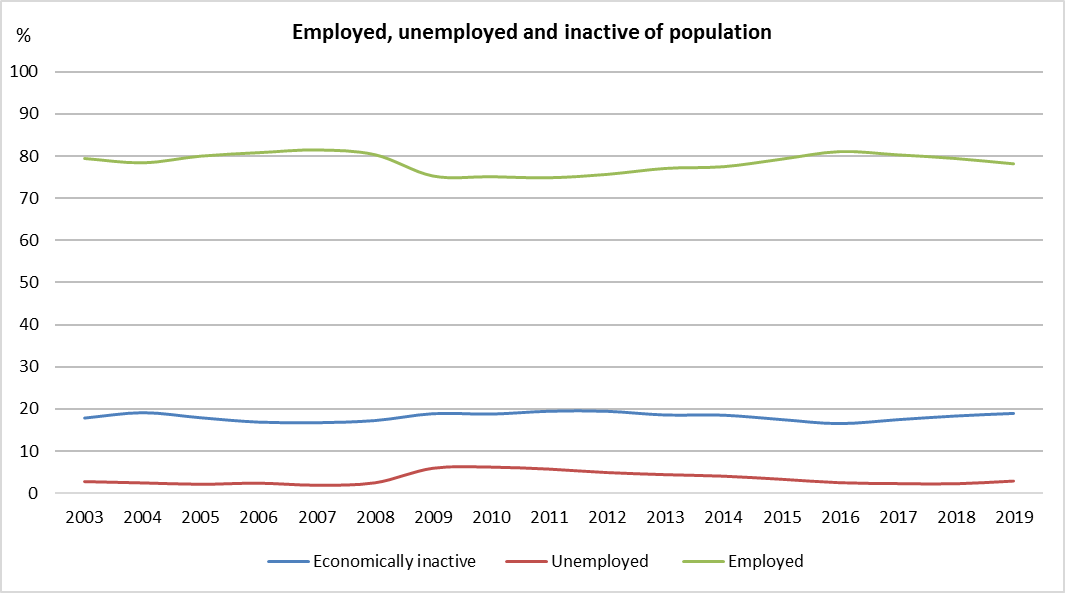 Such figures on people in the labour market are based on the definition of the International Labour Organization (ILO). They give insight into the economy and labour market trends, but do not tell the whole story. As an example, further information can be gained by a closer look at groups that are on the brink of unemployment: (a) people on the boundary of unemployment and employment; and (b) people outside the labour market who are not considered unemployed. Underemployed persons are part-time workers who wish to work additional hours and are available to do so. Part-time work is recorded as self-reported by individuals. Potential labour force is the sum of persons neither employed nor unemployed who: (a) were actively seeking work during the past 4 weeks but not available for work in the next 2 weeks; or (b) were jobless but available and want to work but not seeking it. 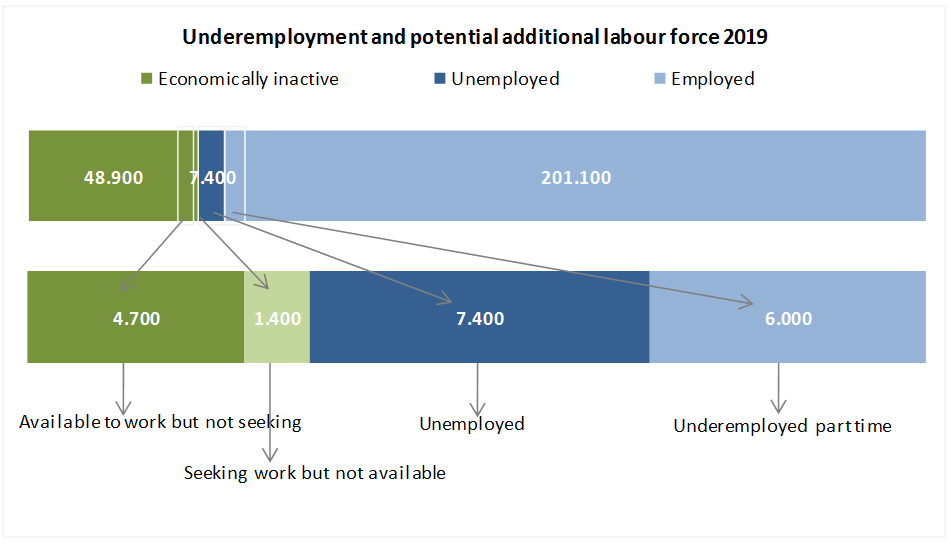 These three groups do not meet the full criteria of the ILO unemployment definition, i.e. being without work, actively seeking work, and being available for work. However, even though they are not measured in the unemployment rate, these groups represent a form of unmet demand for employment. While underemployed part-time workers are part of the labour force, the two other groups are part of the population outside the labour force. These supplementary indicators complement the unemployment rate to provide a more complete picture of the labour market. In 2019, nearly 19,600 persons where unemployed, underemployed or potential labour force, which is 7.6% of the total population 16-74 years old. 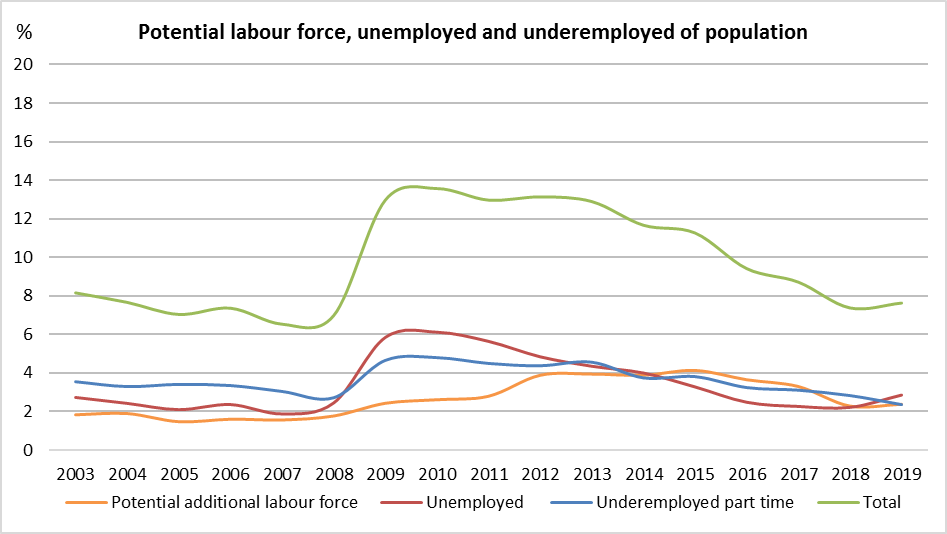 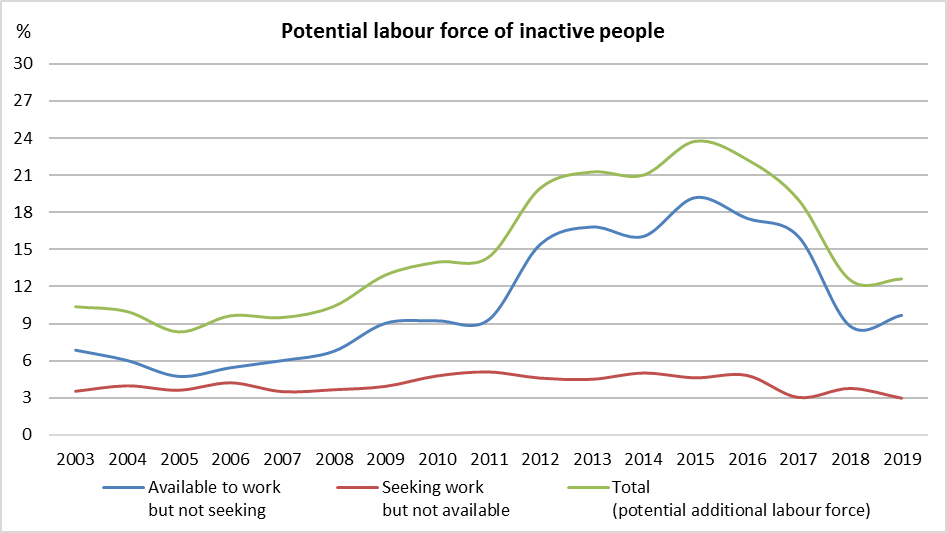 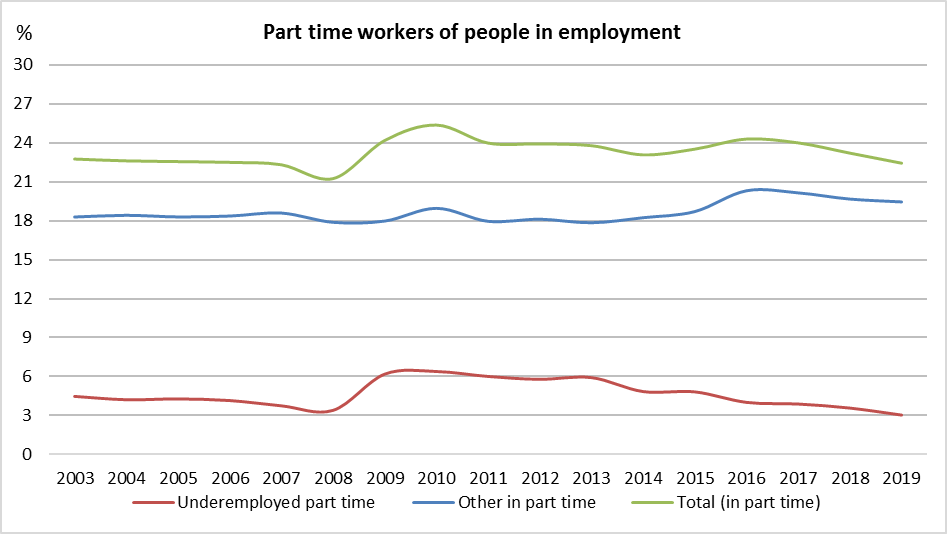 About the Labour Force Survey
The total sample size for the year 2019 was 19,958 persons 16–74 year old selected randomly from the National registry. When those who had passed away or were living abroad had been deducted from the sample, the net sample was 19,533 persons. In total, the number of valid answers was 12,084 corresponding to a 61.9% response rate. All figures have been weighted by sex and age. The confidence limit of the results on activity rate is ±0.6 percentage points, employment rate ±0.7 percentage points and unemployment rate ±0.4 percentage points.