Altogether 191 Icelandic full-length cinematographic feature films have been premiered in Iceland since 1949 to the end-of-year 2017. Nearly all of the films have been directed by men, or nine out of every ten films. Drama is the most common genre of these film and then comedies. About one of every ten is classified as children and family films. 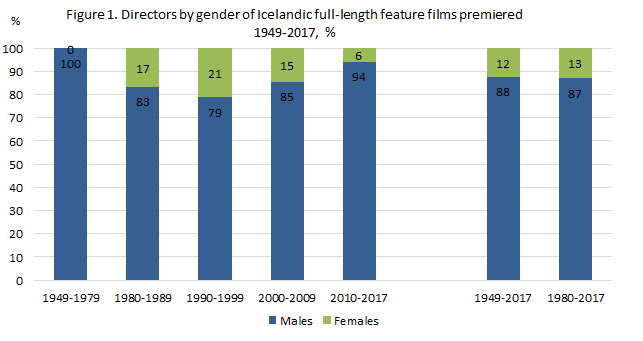 Conversely to what might be expected the share of women as directors has lowered somewhat in last years. Share of women directors was highest in the 1990s, when women directed 21 films, compared with six per cent since 2010 (see figure 1).

The film is a specific art form with its own approach of storytelling and choice of subjects. This can partly be explained by the fact that only two of every ten films premiered since 1949 are literary adaptations (see figure 2). 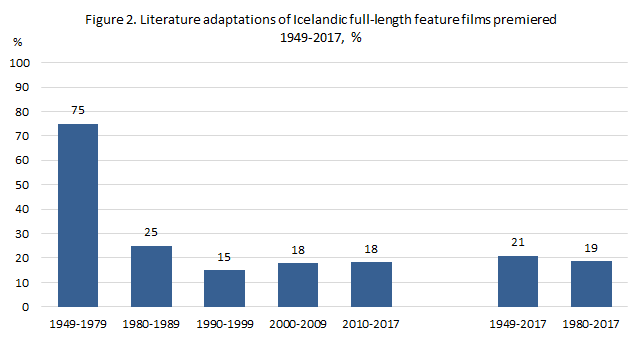 Only one of every ten Icelandic movies premiered since 1949 are classified as children and family films. Those were most common in the 1990s, when their share of all films reached 15 per cent (see figure 3). 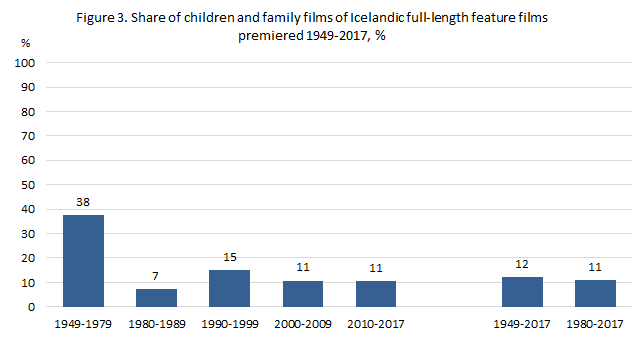 Two out of every three movies are in the drama genre. Comedies come second, four of every ten and 16 per cent are action movies and thrillers. Other genres are much less uncommon (see table 2).

Note: Films are usually classified by more than one genre.

Of the 191 films premiered since 1949, 76, or four of every ten, have been co-produced in partnership with foreign producing companies (see figure 4). Foreign producers come from 26 countries, most from the Nordic countries. Before the 1990s Icelandic films were rarely produced in co-operation with foreign producers. In the 1990s six of every ten premiered films were made in co-operation with foreign companies. Since then the share of co-productions has declined as only 39 per cent of domestic films premiered 2010-2017 were made in foreign partnership. The falling share of co-produced films can be explained to some extent by technical changes in the process of film production which have eased somewhat the high financial risks involved in film production. 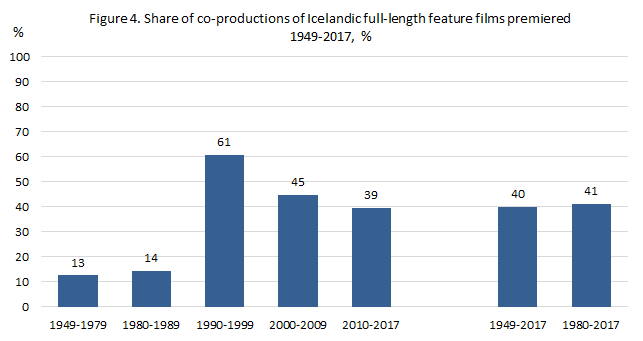 From 1967 to 2017 Icelandic film producing companies have participated as minority co-producers in production of 35 foreign full-length cinematographic films in cooperation with producers from 25 countries altogether. Most common is participation with US producers (11 films) and Danish producers (9 films).

About the data
Information about the film are derived from The Icelandic Film Institute‘s data base Icelandic Films, European Audiovisual Observatory’s Lumiere Data Base and the Internet Movie Database (IMDb).
Full-length feature film is defined here as cinematographic film which at least one hour running time. TV movies and documentaries are hence excluded.

Go back
Use of this press release is free. Please quote the source.
For further information please contact Ragnar.Karlsson@statice.is, tel. +354 528 1051