In the wake of the financial collapse in fall 2008 there was an appreciable slump in revenue of the media (i.e. newspapers, magazines and other periodicals, radio and television and web media). Between the year 2007 and 2010 the revenue of the media declined about a quarter, measured in fixed 2016 prices. Despite substantial decline this is somewhat lower than is claimed for some other countries¹. The decline was more serious in revenue drawn from advertisements than in users’ fees and revenue direct sale to customers. Revenue derived from advertisements have fallen about one fourth since it peaked in 2007 compared with nine per cent decline of revenue derived from users and sale, measured in fixed 2016 prices. In more recent years the revenue of the media has increased slightly and is now more than less comparable to what they were shortly after the turn of this century (see figure 1). 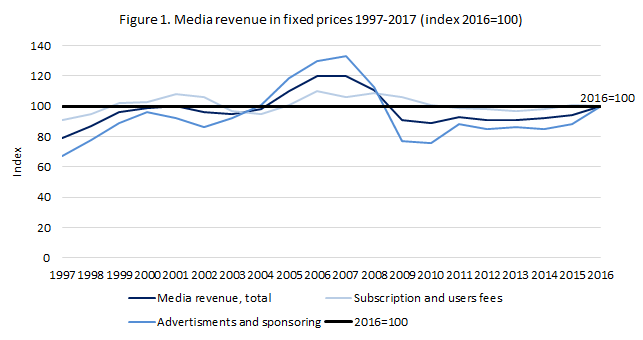 New patterns in media consumption are partly captured in changed share of different media in the media revenue over time as shown in figure 2. In 2016 the share of television was 48 per cent compared with 40 per cent in 2000. Radio’s share has changed only slightly between the years 2000 and 2016, or from 12 to 13 per cent. At the same time the share of magazine and other periodicals fell from nine to five per cent and the share of daily and non-dailies dropped from 38 to 26 per cent. The share of the web media increased from mere one per cent in 2000 to eight per cent in 2016. 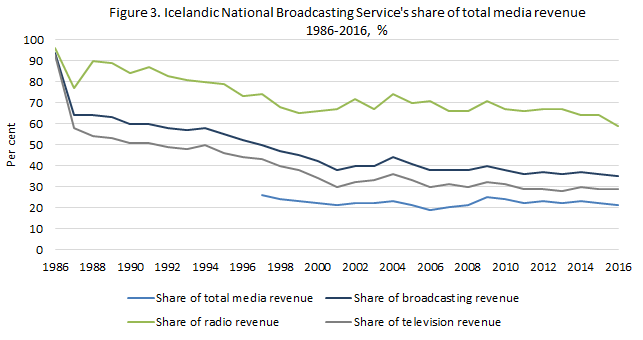 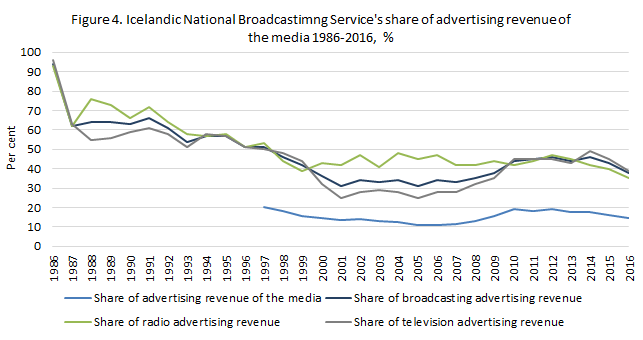 About the data
Information about revenue of the Icelandic media are derived from information from the media companies to the Icelandic Media Commission (since 2011), to Statistics Iceland and annual accounts. In the instances when information is lacking from media operators revenues are estimated from VAT tax reports and other available information. Media revenue is here defined as revenue from users (subscription fees, single copy sales and pay-per view, broadcasting poll tax) and advertisements and sponsoring. The data does not include foreign media. Information about individual private media is not provided due to rules of confidentiality.

¹It is estimated that the fall in revenue of the US media in the aftermath of the banking crisins in 2008 was 40 per cent (R. G. Picard, The Economics and Financing of Media Companies. 2. rev. ed. New York: Fordham University Press, 2011).

Go back
Use of this press release is free. Please quote the source.
For further information please contact Ragnar.Karlsson@statice.is, tel. +354 528 1051