According to calculations made by Statistics Iceland, accrued-to-date pension liabilities of the social security system stood at ISK 1,606 billion in year-end 2015. In comparison, pension liabilities of pension funds of private enterprise employees (direct contribution schemes) amounted to ISK 2,170 billion and ISK 1,377 billion for pension funds of public employees (defined benefit schemes) in year-end 2015. 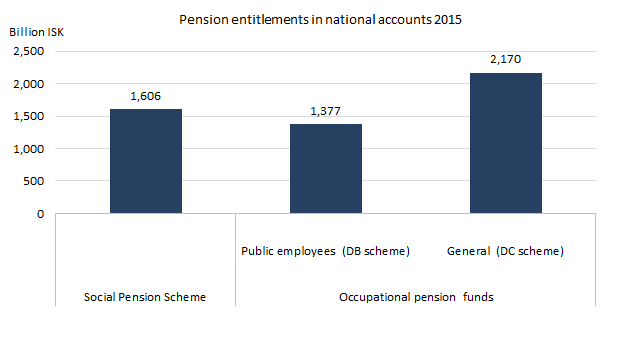 These new statistics on estimation of accrued-to-date liabilities of social insurance in Iceland are a part of the implementation of the ESA 2010 national accounts standard (Table 29). Many member countries of the European Union, in addition to Iceland are now publishing these statistics for the first time.

For estimating the pension entitlements of the social insurance system, the methodology of accrued-to-date liabilities (ADL) was chosen. According to ADL only entitlements of those who had gained entitlements at that particular point in time are considered. This method excludes any possible entitlements gained during working life thereon, and any new entrants to the system. It is a point-in-time estimate for the accumulation of entitlements at year-end 2015. The results are therefore not an indicator of fiscal sustainability of the social insurance pension system, as it is not a funded system. ”Old age pension” in social insurance that was included considers base pension, income and single household supplements paid out by the Social Insurance Administration. Survivor’s pension and disability pension for recipients under retirement age was not considered. 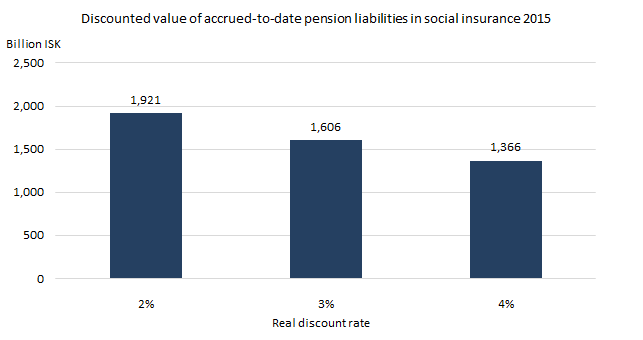 Accumulated pension liabilities of social insurance as percentage of gross domestic product in Iceland stood at 72%, which is somewhat lower than in the countries of comparison in figure 3. However, it is worth noting that social insurance pension schemes can significantly differ between countries as well as the demographic structures, which makes comparison difficult. 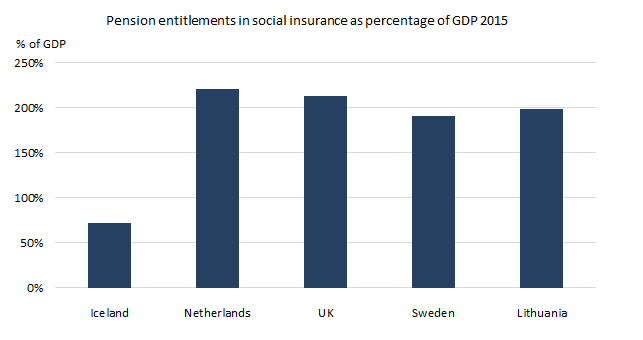 Not all member countries have published their findings yet, but they are expected on Eurostat’s website later in the year.

Next scheduled publication of pension liabilities in national accounts is in 2021.