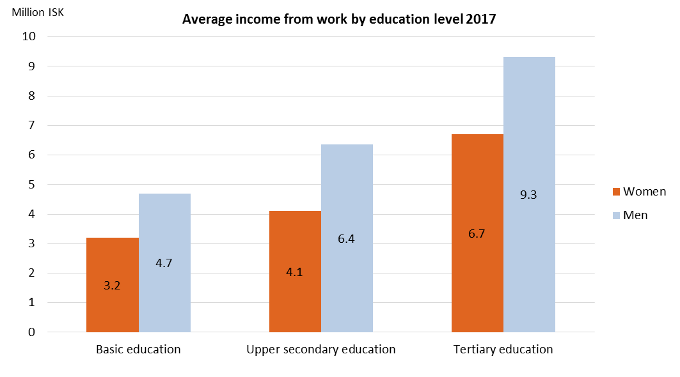 Note: Annual wages and other work related income of those who have some income from work.

In 2018, the labour force participation rate was 78% for women and 85% for men. The unadjusted gender pay gap was 15% in 2017, but 14% for full-time employees. Women are now 38% of elected members of the Althingi and 47% of local government members but their share in many other positions of influence is lower. At the beginning of 2019, women were 36% of municipal managers (mayors) and close to 42% of managers of state institutions. Of the eight judges in the Supreme Court one is a woman but women´s share among 42 district judges was 38% in 2018 and 47% of 15 judges in the newly formed Appeal Court. The proportion of women as managers of enterprises was 22% in 2017. At the same time their share was 24% of chairpersons on boards of directors of active enterprises and 26% of members of boards of directors. 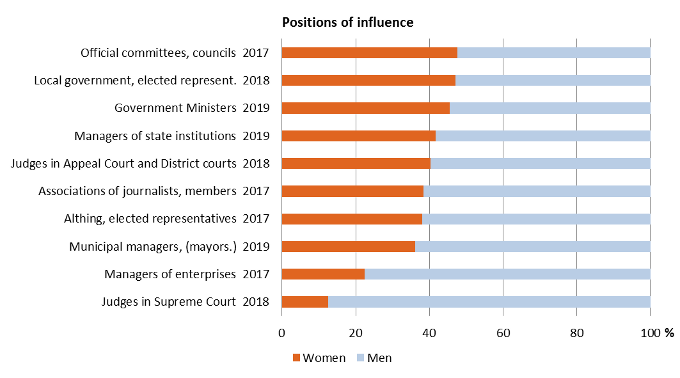 Statistics Iceland has published the leaflet Women and Men in Iceland 2019 in cooperation with the Directorate of Equality and The Prime Minister´s Office. The leaflet has information on the status of women and men in the community. It covers information on population, media, education, labour market, wages and income and positions of influence presented in figures and diagrams. The leaflet is published both in Icelandic and English. Key figures on women and men have been updated as well. They show the variety of statistics by sex available on the Statistics Iceland’s website.

Go back
Use of this press release is free. Please quote the source.
For further information please contact Sigridur.Vilhjalmsdottir@statice.is, tel. +354 528 1054