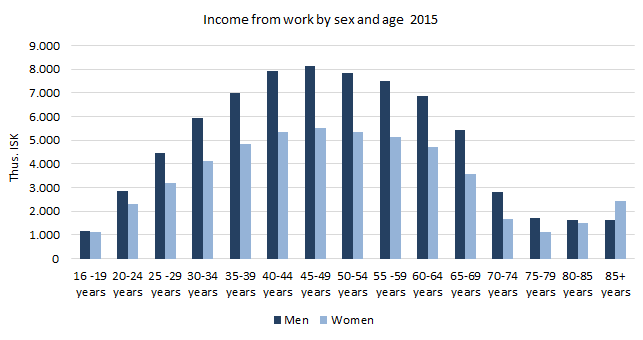 The gender wage gap of income from work increases with each decile and men’s income in the highest decile was over 12 million ISK per year while women’s was 8.5 million ISK in 2015. 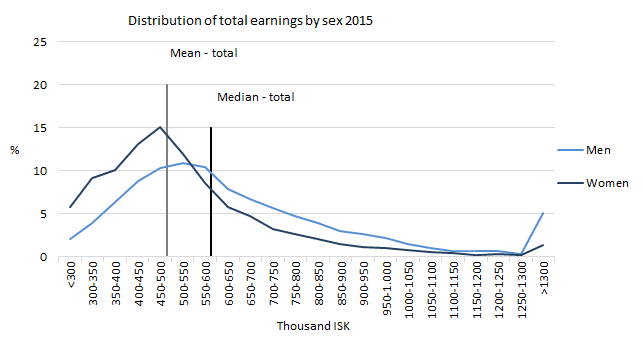 In 2015, according to the Labour Force Survey, the number of employed men was 96,200 and employed women 87,500 and the labour market to some extent gender segmented. In the economic activity of Construction, the proportion of men was 95% while the proportion of women was about 80% in the economic activities of Education and Human health and social work.

The distribution of full-time employees’ total earnings differs by economic activity. In Human health and social work men´s mean total earnings vary more than those of women.  It can partly be explained by different job structure between the sexes. For example, among professionals about 60% of women were nurses and midwifes while about 70% of men were medical doctors. 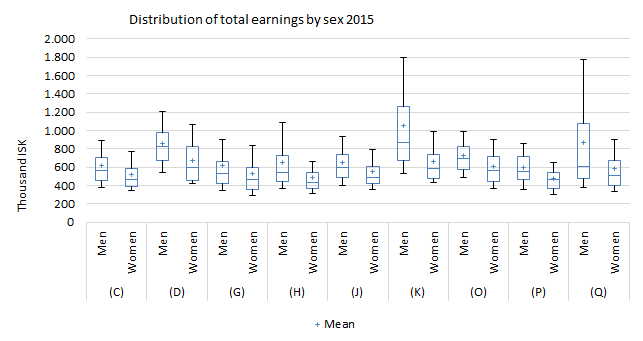 Earnings are based on the Icelandic Survey on Wages, Earnings and Labour Cost and cover about 70 thousand employees. The survey is a stratified sample survey and data are weighted according to the survey design. The survey covers about 80% of the Icelandic labour market even though certain economic activities are missing. Regular earnings are monthly remuneration for regular working hours that is ordinary working hours according to collective agreements, both daytime and shift-work hours. Total earnings are the total remuneration per month, excluding payments in kind. The earning’s gender pay gap is interpreted as the difference of mean men’s and women’s earnings as a proportion of men´s earnings.