The economic forecast for 2011-2016 assumes that a gradual recovery will start in 2011 with 2.3% growth after contraction of 3.5% in 2010. Positive growth is expected throughout the rest of the forecast period, given that planned large scale industrial investments are not further delayed. A surplus in trade is expected during the forecast period. Consequently private consumption is expected to grow from 2011 to 2016. 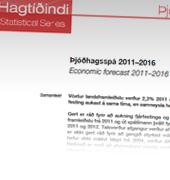