The economic forecast for 2011–2016 assumes that a gradual recovery will start in 2011 with 2.5% growth after a contraction of 3.5% in 2010. Positive growth is expected throughout the forecast period, given that planned large scale industrial investments are not further delayed. Inflation had declined to 1.8% in January 2011, the lowest since 2004. However, recent decline of the Icelandic króna as well as an increase in utility and commodity prices have caused a slight increase in inflation. 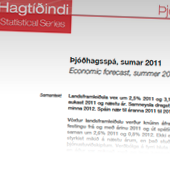