Catch, value and processing of catch 2010

The total catch of Icelandic fishing vessels in 2010 was 1,063 thousand tonnes which is 66 thousand tonnes less than in 2009. The value of the catch amounted to 133 billion ISK and increased by 15.2% from previous year, 11% increase at constant prices. The largest part of the catch was processed in the eastern part of the country, mainly pelagic fish. The highest regional share of the demersal catch, almost quarter of the quantity, was processed in the capital area, mainly in Reykjavík. The main processing method for cod was freezing in land-based factories, as was for haddock. 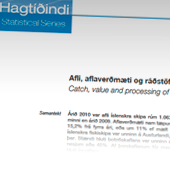