The revised annual national accounts for 2007 show a 4,9% growth in Gross Domestic Product (GDP) in real terms in 2007. In the provisional data from March 2008 the growth was estimated to have been 3.8%. The upward revision is mainly explained by a higher gross fixed capital formation and government final consumption than was estimated in March and revised figures on inventories in the aluminium industry. In 2006 GDP grew at a rate of 4.4%, unchanged from previous figure. 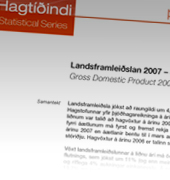