Consumption of alcoholic beverages in Iceland has increased from 4.33 litres of pure alcohol per inhabitant 15 years and over in 1980 to 7.53 litres of pure alcohol in 2007. The sale of beer (over 2.25% by volume) made a turning point in the consumption pattern. In 1988, the year before the sale of beer was legalised, strong spirits amounted to 77% of the total consumption of alcohol while wine was 23%. The consumption of both beverages dropped considerably the next year, strong spirits to 52% and wine to 14%, while the beer accounted for 34%. From then on there has been a steady rise, proportional, in the consumption of beer and wine, while there has been a decrease in spirits consumption. 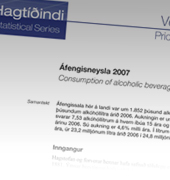