In 2010, the financial balance of the general government was 155 billion ISK in deficit or 10.1% of GDP, which can be compared with a deficit of 10% of GDP for 2009. These unfavorable results can be explained by a drastic decrease in revenue due to a 11% fall in GDP in 2009-2010 in real terms. At the same time, the expenditure increased heavily due to an increase in financial liabilities and unemployment. 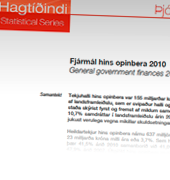