In 2011, 11.3% of the Icelandic population lived in a household with housing cost which was over 40% of their disposable income. The housing cost overburden rate was highest for those who live alone, for young people, for people in the lowest income quintile or tenants who pay market rent. Housing cost was just over 18% of disposable income in Iceland in 2011. Tenants used higher proportion of their income in housing than owners. In 2010, 18 European nations had lower housing cost overburden rate than Iceland. 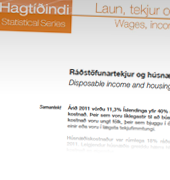