In the Statistics Iceland SILC survey 2011, 10.2% of households said they were in arrears on mortgage or rent payments in the past 12 months and 12.4% of households were in arrears on other loans during the same period. 31.6% of households said that housing cost was a heavy burden and 15.2% said the same about payments of other loans. Over half of all households were struggling to make ends meet, 51,5%. Generally speaking household financial situation is somewhat worse in 2011 than it was in 2010. The exeption being arrears and burden of loans other than housing loans which decreases between years. 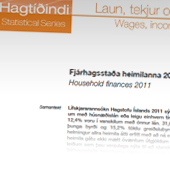