The Gini-index, which shows the distribution of disposable income among people in private households in Iceland, was 28 in 2006. The index would be 100 if one person had all the income of the country but 0 if everyone received equal income. The Gini-index has been growing every year since 2003 when it was 24. Out of 29 European nations, Iceland ranked 15 to 16 when the nations were ordered from the lowest Gini-index to the highest. 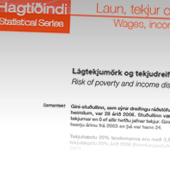