Use of computers and the Internet by households and individuals 2009

In 2009, 92% of Icelandic households had a computer and 90% had access to the Internet. Half of the households had two television sets or more and 48% had a flat screen TV. Broadband connection is also very common at 97%. 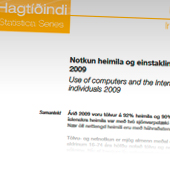