Women and men in positions of influence 2008

In general, women are a minority when it comes to positions of influence. The share of women has increased in many areas of decision making in recent years but there is also a sign of standstill or decrease. Women are now a third (33–37%) of elected members to the Althingi, of the government ministers, the elected representatives of the local government councils, highest ministerial offices, district judges and members of public committees. Women are a quarter (24–28%) of managers of state institutions, municipal managers and boards of the biggest pension funds. The majority of school administrators in pre-primary and compulsory schools are women whereas men are a majority in schools at higher education level. 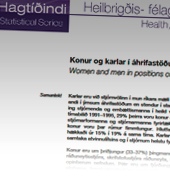